Please visit our other sites at www.TriloBoats.com and TriloBoats.blogspot.com for plans, background and focused discussion.

I've got to apologize for the abrupt break in this narrative. And just as things were getting exciting!

Our primary internet access went down, and we've only now cobbled together a work-around. Alas, it's still far from optimal for a number of reasons. Further posts will remain catch-as-catch-can.

So, an update for now, and I'll back-fill to catch up as I'm able.

WAYWARD has been made weather-tight (decks sheathed, hatches, paint and windows). The copper bottom plate is complete, with only the chine angle to go (more about a SNAFU re the angles, later).

In October, we were obligated to switch over from Tyee to Warmsprings Bay (about 12nm distant) for winter caretaking at the latter. Complicating the matter was a hydro power washout that leaves us with intermittent electrical and much compensatory wood-processing over the winter.

After much waffling, we decided not to launch and bring WAYWARD with us. Since she's yet unrigged, wed need a tow both directions, imposing on others for the favor. Given our duties, there's very little chance of working on the boat over the winter. Finally, WSB is a wet hole compared to Tyee, and mold and mildew of much greater concern.

So it's a seven month break from building, for us. We brought sailmaking tools and material, and hope to complete them by our return in May.

Meanwhile, we hear from Tyee that WAYWARD's decks appear to be looking fine after a very wet few months in the open. This is good early news for the experimental sheathing – acrylic cloth set in TiteBond III. It was inexpensive, easy on our health, easy to apply, even under marginal conditions (persistently high humidity) and water clean up. But more on that, later.

Happy Holidays to one and all! 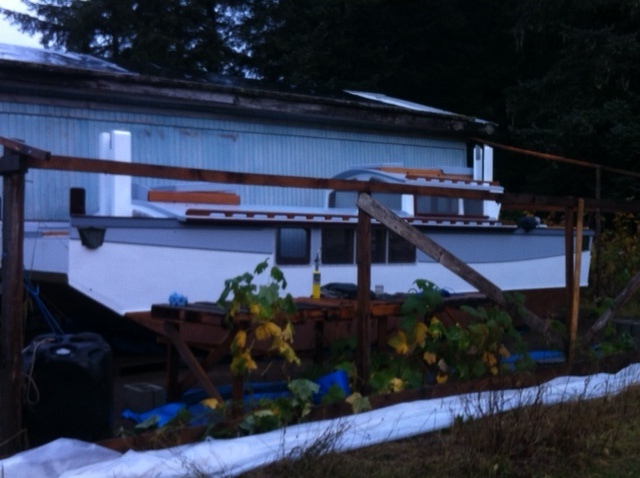 Email ThisBlogThis!Share to TwitterShare to FacebookShare to Pinterest
Labels: Finish and Detail

Dave Z
Anke and I live aboard WAYWARD, our T32x8 ketch. We sail by wind, tide and muscle in the waters of mid- to northern Southeast Alaska. We try to maximize the joys of life, and minimize the chores. ........ We live between the communities of SE Alaska, but drop in to visit with friends. Lately, we've worked, every other winter, care-taking Baranof Wilderness Lodge in Warmsprings Bay. This has given us a window on Web. ........ We're working toward a subsistence lifestyle, somewhat impeded by addictions to coffee, chocolate and cheese. ........ We think TEOTWAWKI is looming, and while we won't be ready, we'd at least like comfortable seats.