Please visit our other sites at www.TriloBoats.com and TriloBoats.blogspot.com for plans, background and focused discussion. 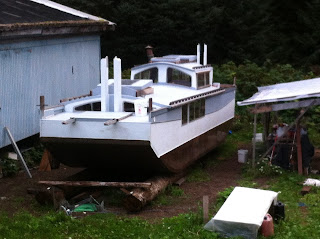 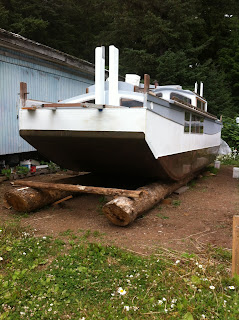 Sitting on Log Sled, awaiting Launch
OCB guards have been added since these photos

Again, my apologies. Updates have been pretty scarce, this year, as internet hasn't been readily available.

We got back to Tyee in early May, and moved aboard. I know, I know. We swore on a stack of Kama Sutras that we'd never do that again. Slow learners = slow builders.

After a winter in the open, the exterior looked fine, aside from bleed-through the latex house paint. This is good news on the TiteBond III we used to lay our acrylic deck sheathing... still looking good as of this writing in spite of heavy, gravel tread traffic.

Aside from a spot or two, the cabin was dry and mildew free, including the new cushions, for which we were very thankful.

The holds were another matter.

Neither had been painted nor insulated. Water got in via the unfinished vent holes (thanks to a mis-communication on their temporary raingear), and the walls and panels were pretty much solid mold.

After elbow greasing ithe joint, we tried out an ozone generator.Ozone (O3) breaks down to O2 + O. That free oxygen atom, in large numbers lethally oxidizes living beings, including fungal spores. It's used to sterilize hospital operating rooms. I can't swear that it killed our mildew, but  the musty smell disappeared at once, and we've seen no spread.

Just for good measure, we stomped on its grave with a liberal coat of borates in glycol.

Only downside was, the borates react with TBIII (the glue we'd been using for insulation), curdling it on contact. So we switched to tar, and soldiered on. It is all successfully contained behind the inboard face of 1/4in plywood, but is a pain to apply.

Overall, we doubt we'd choose ply-foam-ply to insulate the hull walls (decks, yes; walls, no). Inch and a quarter, double ply walls were cozy on Andy Stoner's MARY ELISABETH, even without double pane windows, and built in a tenth the time. No internal framing necessary where fastening through (as at bulkheads) or mounting cleats or hardware. Ply-foam-ply - after our second try - counters a fair bit of the Triloboat quick-and-dirty advantage. Sigh.

We got our wood range in, recently, and are loving the warmth and cooking on a fire.

We're ready to launch when our host is available to do so. All that's left is last spring's final paint job, rigging and odds and ends. With luck, we'll be sailing in two months. Without luck? Well...

At this point, we figure we've got nine solid months in the build (albeit stretched over three seasons). That gives us three to go on our 'probable case scenario' of one year. Surprisingly, that puts us ahead, in project time. In fact - given that much more of the interior is finished than we'd initially planned for this year - we're a long ways ahead.

But, y'know, looking out at that water every day...

Dave Z
Anke and I live aboard WAYWARD, our T32x8 ketch. We sail by wind, tide and muscle in the waters of mid- to northern Southeast Alaska. We try to maximize the joys of life, and minimize the chores. ........ We live between the communities of SE Alaska, but drop in to visit with friends. Lately, we've worked, every other winter, care-taking Baranof Wilderness Lodge in Warmsprings Bay. This has given us a window on Web. ........ We're working toward a subsistence lifestyle, somewhat impeded by addictions to coffee, chocolate and cheese. ........ We think TEOTWAWKI is looming, and while we won't be ready, we'd at least like comfortable seats.